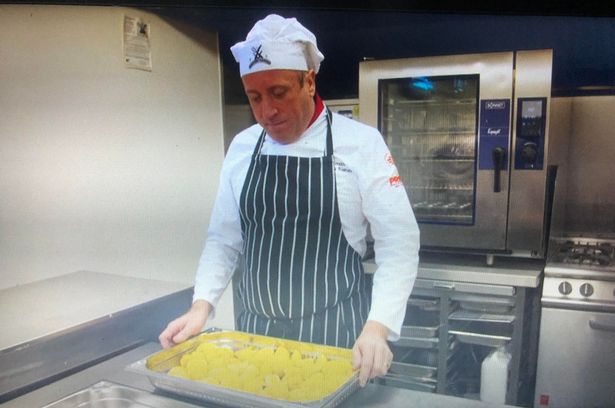 A Sunday dinner is not quite the same without some key staples – a good roast, Yorkshire puddings and of course a pile of roast potatoes. But how to creat the perfect roastie has long been up for debate.

Now Channel 5 viewers have been treated to a step by step lesson in how to get them just right. In the show Toby Carvery: How Do They Do It? James Smith, a kitchen skills trainer for the roast dinner chain, gave the low down on how they get them right every time.

On Friday’s show he talked viewers through exactly what happens with every roast potato which finds its way onto the plates of diners. According to Gloucestershire Live Britons eat 1.3bn roast dinners, with 31m customers flowing through the doors of the chain to eat 11,000 tonnes of potatoes every year.

And while there are other options, such as mash and dauphinoise, it is the traditional roastie which it the most popular. And with perfection being essential, it is down to James to make sure the chefs know exactly what they need to do to get it right.

He says for the chain it needs to be done on industrial scale. So while parboiling then roasting works for many smaller restaurants and at home it isn’t the best option for the quantities they get through.

Instead he opts to par-steam the potatoes in a massive machine. He said: “We do these in a high pressure steamer. So, they’re in a tray which will let the steam circulate.

“We only want to cook these enough just to soften up the outsides of the potato, so we can ruffle them up and get a really, really crispy roast potato. We then press ‘Start’… then shut the door and they’ll be ready in about three minutes and 50 seconds.”

James steams the potatoes for this exact amount of time so they are ready for a process he calls ‘ruffling’. He continued: “All we’re going to do is just take out the potatoes and give them a good old shake. You can sort of see the edges of the potatoes starting to break up.”

Ruffling is James’ secret to producing perfectly crispy potatoes, as the process creates rough edges to the outside of the potatoes, which then crisp up. As you are unlikely to have one of the industrial steamers James uses in the Toby Carvery kitchens, two other chefs explained how they perfect crunchy roast potatoes with a fluffy centre.

Home cook Francesca Harris always parboils her potatoes before draining them and allowing them to cool for ten minutes or so – a step she says is most crucial. Meanwhile, MasterChef: The Professionals winner Gary Maclean swears by coating the potatoes in semolina.