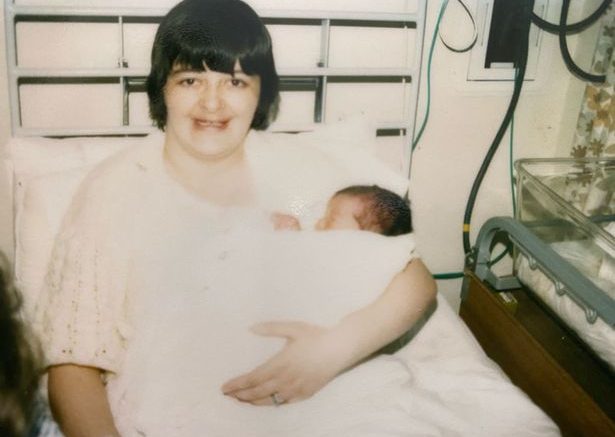 “Mum would make us our main meal early in the day because, by the time I’d come home from school, she’d be too drunk to really do anything.

“Most of it tasted awful though, and, to this day, the smell of certain food gives me flashbacks – like I’ll remember how she used to keep one of our old pottys stowed away in the kitchen to go to the toilet in.

“After she’d had a few she couldn’t be bothered to make it up the stairs to the bathroom, you see.”

Rev Steven Bunting from St Thomas Church in Swansea has described his tragic childhood in order to encourage others who need foodbanks to reach out for help.

Growing up with an alcoholic mother and gambling addicted father forced him to scavenge food scraps from supermarket bins in order to survive.

He made the heartfelt confession on Facebook after seeing more and more people in his local area struggling to make ends meet for themselves and their children, many of whom are too embarrassed to ask others for help.

“My dad, who worked as an aircraft engineer, had a terrible betting problem and would spend what money he had on the horse racing or feeding the fruit machines, which meant we were never left with a lot,” said Steve, 39, the youngest of three boys.

“He walked out on us by the time I reached school age, so we were left with Mum. I was about four at the time.

“Linda was her name, and, for as long as I can can remember her, she had a problem with alcohol.

“Her mother and her sister were the same, addiction was a disease that had ran through her family for a very long time.”

Steve added that much of his childhood seemed to have been spent sitting in the dark feeling hungry.

Very often, if the money ran out in the electricity meter, he and his siblings would have to sit there in the pitch black until the next morning.

“Then there’d be a long walk the next day, miles usually, to get money to top the meter up again – picking up the income support from the post office and trudging back home carrying what shopping we could afford.”

A vocal advocate of the current importance of food banks, Steve recalled sometimes having to scavenge for scraps in the food bins round the back of local supermakets.

“If we needed food I’d climb into the skips filled with items which had passed their sell-by date, a lot of which was still perfectly edible, and stuff them in my bag,” said the dad-of-four.

“A few nights, if the weather was okay, I actually slept in a skip full of cardboard round the back of the stationary shop – it was easier being there than at home a lot of times.”

Eventually, after numerous attempts at stopping his mother drinking – “I’d hide her purse and her booze, but she’d somehow find a way of getting her hands on something to swig” – Steve was forced to move out of the family home.

Years later, having come to Swansea to study, he found religion after attending a local church group and discovering a sense of belonging he’d never felt before.

“I became a vicar in 2012 and the first thing I did in that role was deliver Christmas dinners for those living alone, along with delivering presents to people who wouldn’t have anything.

“I don’t want anyone to go through what I did, so I’m trying to break that cycle and prevent kids getting long term damage from the bad choices their parents may have made.

“I’ve certainly been shaped be the things my folks did, but I don’t blame them – they were victims of their own circumstances too.

“In a way, I get why my mum liked a drink, bringing up three boys on your own with no support network is hard.

“That’s why I don’t want anyone out there who might be struggling to be ashamed to ask for help if they need it  – if there had been food banks back in my day then I most definitely would have used them.”

He added that his church’s food bank runs five days a week, between eight in the morning and four in the afternoon,  and it sees a constant stream of people turning up – 81 in the last seven days alone.

Meanwhile, he and other volunteers spent the first lockdown earlier this year helping to deliver over 10,000 free school meals to homes across Swansea.

“The food bags were supposed to be picked in person at the school, but I think the stigma of being seen as turning up with your hands out was putting people off – I believe the turnout was as low as 30%.

“So we offered to take supplies straight to people’s doors, because it upsets me to think there are those in my parish who are going hungry, or are cold because they can’t afford to turn on the heating – that’s not acceptable in 2020, certainly not in a so-called developed country.”

Steve added that Linda eventually died aged 60 of pneumonia, having been hospitalised after an accident at home.

“She passed away seven years ago this week and I presided over her funeral myself.

“There were only about seven or eight mourners because she’d long since pushed away her friends and alienated those who cared for her.”

So, are the things he does partly to make up for the fact he couldn’t save her?

“But she just wouldn’t give up the bottle – even right up until the end she was getting her carers to go and buy her cans of Kestrel Super to drink.

“It’s not like I didn’t try to help her though, it’s just that nothing I did was enough.

“None of which stops ‘if only’ from still being the saddest words in the English language.”

If you want to contact the Rev Bunting you can call  01792455671, email office@sts.church or go to his church’s Facebook page here.

Man exposed himself to girls near Swansea school before cycling away

Between Friday and Monday, South Wales Police received more than 550 Covid-related calls – a 20% increase on the previous weekend WalesOnline – Swansea …